Perhaps I had made a mistake in settling on Beaune rather than Autun: there was only time to visit one town and Beaune fitted my rail itinerary. Once inside the town walls, the medieval streets were choked with tourists. What a contrast from the previous five days of walking along the Nivernais Canal, visiting  small villages, which I suspected were under a twenty four hour curfew together with a past visit from an aggrieved pied piper.  Locating a shop for basics had been exasperating and a cafe as easy as finding a vineyard in Belfast.

In Beaune they know how to mine the rich seam of tourists and have honed their entrepreneurial skills to chip away at wallets. The town is dominated by vinification; wine shops, museums, tastings, bottling and cellars where visitors emerge into the light clutching cases of liquid gold.  A glass of wine to accompany lunch may cost the equivalent of a main course.

The next morning however, my disappointment turned to delight, when I discovered the Hôtel-Dieu, a hospice . . . a palace for the poor. This unique institution has been funded since the 15th Century by the practice of philanthropy through wine. By the end of the morning a story was unfolding which made me glad I had come to Beaune. The story  isnot only one of philantrophy but also of political corruption, religious dogma and medical professionalism. 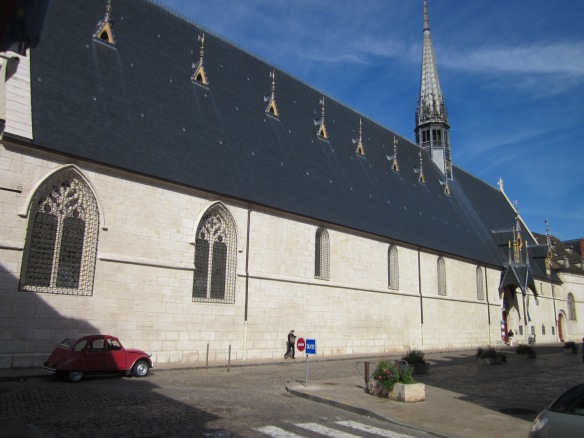 The plain exterior of this rectangular complex gives little indication of the treasures it holds within. 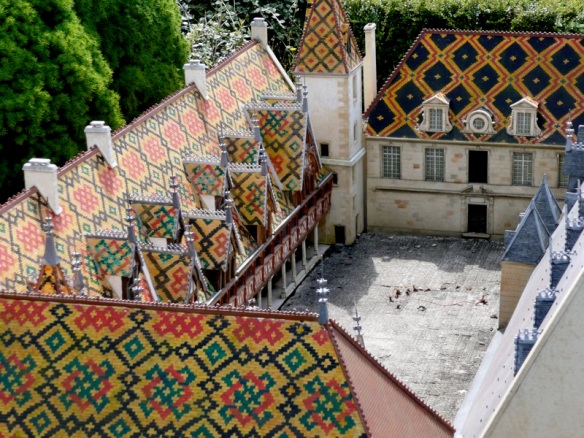 The polychromal roofing  is stunning.  But all is not what it seems. The guide book informs us that “the polychromal roofs and colours were the result of a strictly personal interpretation” by the restoration architect in 1901. In fact the original roofs were slate.

In 1435 the Treaty of Arras was signed, ending the spat between the Duke of Burgundy, Phillip 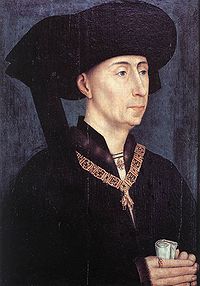 the Good and Charles VII, King of France. Philip held Charles personally responsible for assassinating his father, John the Fearless. His response was to form an alliance with the English.

However, the Duke now recognised Charles VII as King of France and abandoned the English, while Charles recognised Burgundy as an independent state, apologised for the murder and handed over several border towns to Burgundy. Burgundy was bigger than today, taking in present day Belgium and parts of Holland. The Hundred Years War was drawing to a conclusion and by 1453 the English would be driven back to Calais. For Burgundy the expected peace and prosperity did not follow: hoards of their disbanded army roamed the countryside terrorising, looting and committing atrocities. The disruption to agriculture was aggravated by poor harvests. To add to the famine, the plague returned. All four riders of the Apocalypse had arrived.

Enter Nicolas Rolin (1376–1462), Duke Philip the Good’s chancellor. A brilliant diplomat and architect of the Treaty of Arras, Nicolas had practised as a lawyer in the Paris parliament, spent 20 years as legal advisor to the Duke of Bugundy and 40 as chancellor. By 1422 this made him the second most powerful man in the Burgundy. A power of which he took full advantage. Imagine Prime Minister, Chancellor and Foreign Minister, all rolled into one.

The Duke’sown administration time seems to have been limited due to his other commitments including patron of the arts, leader in fashion, running a lavish court, and 24 mistresses, fathering 18 illegitimate children

Rolin’s first marriage had been a package deal in which he, his widowed mother

and his brother took part in a triple marriage. Widowed, remarried and widowed again, each marriage presented new opportunities  for Rolin to gain more money, power and influence. In 1424 he married Guigone de Salins. Rolin’s intelligence, ambition, industry and eventually power were not enough. This was not a meritocracy: he was not born a noble and that would dog him throughout his career. In this rigid class system the Chancellor amassed wealth, lived like a noble but could not buy noble blood. That Rolin was the only non-noble at the Duke’s top table made him the target of bitter jealousy.  George Chastelain, a comparatively poor noble and official court chronicler, took every opportunity to slight Rolin including “He always harvested on earth as though earth was to be his abode forever.”  I’m drawn to Guigone de Salin’s portrait, pious, perhaps but to me she looks intimidating. For Rolin however she was the perfect match, a noble with lucrative salt mines included in the dowry.  Aged 21, she was 27 years younger than him. Together with Guigone they decide to use his vast wealth to build a hospice in either Autun, his birthplace or Beaune.  The astute Rolin decided on Beaune for its concentration of wealthy potential benefactors, fortifications and the site of the Burgundian parliament. As chancellor he arranged future tax breaks for the venture.There is no doubt that the population of Beaune had huge problems: contemporary surveys show a 20% drop in the population and that 90% of the area’s households were in dire poverty. Rolin employed master craftsmen using the finest of materials. Eight years later in 1452 he introduced six Flemish nuns and their first patients.

Discovering the mistreatment of the staff by the Mother Superior, Rolin’s audacious response revolutionised the administration of hospitals and the role of nurses, serving as a model which spread through France and beyond. Rolin managed to persuade the Pope to grant him a range of privileges permanently exempting the Hôtel-Dieu from the control of bishops. Known as the “rule”, patient care was now to be carried out by lay-women who were accountable to Rolin and were prohibited from taking holy orders or to marry whilst employed by him.  The pharmacy was taken over by the lay-women and they took an oath to uphold the “Beaune Rule”. 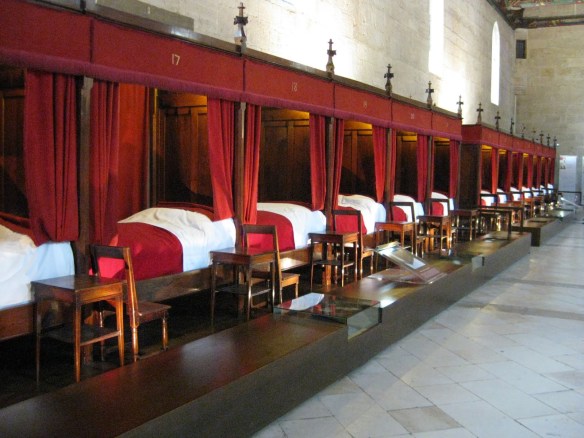 Their esteem grew, and so did the demand for their services throughout France. The “Beaune Rule” travelled with them. Following Rolin’s death in 1462  there were numerous attempts, including one from Rolin’s own son Cardinal Jean Rolin, bishop of Autun, to reverse the rule. First the formidable Guigone de Salins and later the lay-women themselves rallied and defeated all attempts to return them to holy orders. 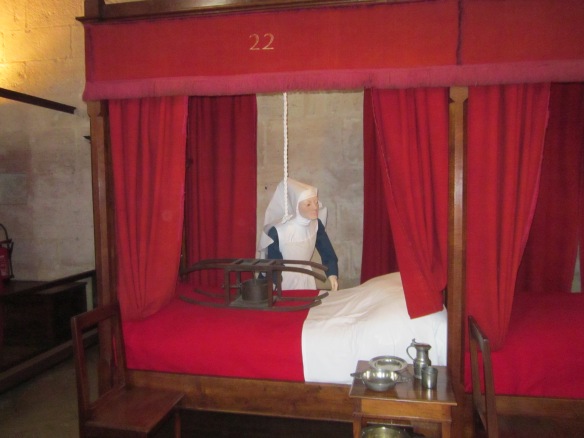 Hospices were originally intended t provide travellers to receive hospitality rather than medical care. Here there was medical care, but spiritual care was considered more important.

We may find it disturbing that medical attention was secondary to that of preparing the patients for the hereafter, but consider what was on offer from physicians. Galen’s theory that disease was caused by an imbalance of humours prevailed. When asked by  Pope Clement VI to explain the cause of  plague, the medical faculty of the University of Paris, blamed it on the alignment of Saturn,

Mars and Jupiter in the constellation of Aquarius which had occurred on  20th of March 1345. This distant phenomenon caused a” deadly corruption of the air”, causing an imbalance of the humours,   Programmes of treatment including phlebotomy -bloodletting- would take account of the stars. There were rules as to the areas that could be bled e.g. Aries –“Avoid incisions in the head and face and cut no vein in the head”; better to be a Scorpio, “Avoid cutting the testicles and anus.” Emetics and enemas worthy of the witche’s scene in Macbeth were also administered. The less invasive measures of John of Burgundy to combat plague included avoiding fruit, vinegar and over-indulgence in food. The eminent surgeon and physician Guy de Chauliac believed the plague could be contracted simply by looking at  a sufferer. The medieval Catholic Church was suspicious that this nonsense was a bit too close to paganism and witchcraft. This threatened their own demands for the suspension of logic. Physician’s measures were largely ineffective and, worse, likely to cause harm. Improved chances of survival were more likely due to better nutrition, warmth, sanitary conditions and rest brought about by the work of the lay-women. 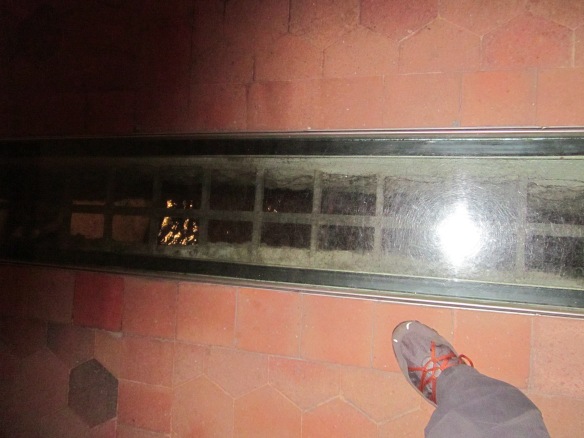 A glass panel on the floor reveals the flowing water of the river Bouzaise that was diverted to carry away the hospice waste. 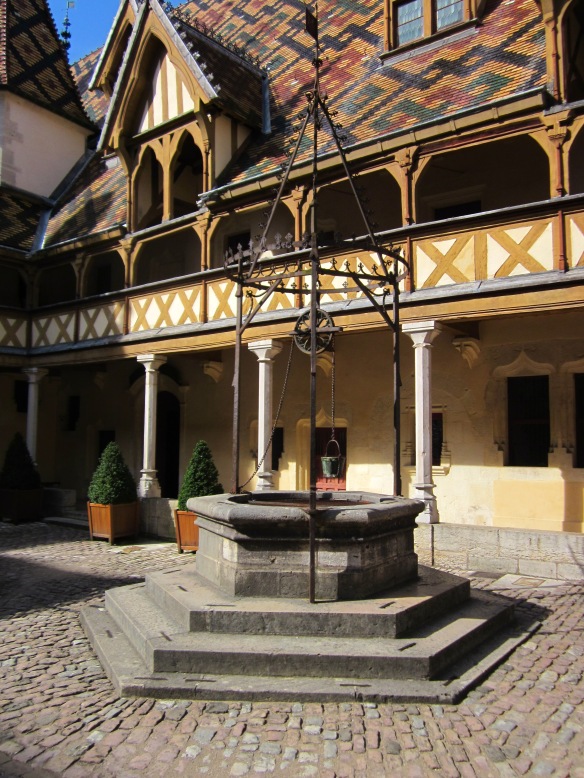 The well was from a protected source and its use was restricted to the hospice.

Why then was there so much emphasis on spiritual help?

Baptism wiped the slate clean as far as Original Sin was concerned, but  those committed during one’s  lifetime had to be dealt with before departure; otherwise they had to be sorted out in an unpleasant way in purgatory before entering Heaven. This did not apply to mortal sins . . . you were going to Hell if you did not confess and recieve absolution. Works of charity such as founding a hospital could speed up the passage through a temporary stage called Purgatory. This was a place of purification beforejoining God and the saints. This offshore penance avoidance scheme involved persuading grateful patients to intercede on behalf of their patron in the form of prayers. Hospitals were expected to care for your soul as much as your health. Illness was often seen as a punishment for sins committed. It was not uncommon for benefactor’s paintings or plaques to be prominently displayed in the hospital, to encourage patients to show their gratitude by praying for their souls to speed its way through purgatory.

Most considered that those people who suffered on Earth with diseases such as leprosy were going through a living purgatory:  suffering in this life because of their sins. Logic would suggest that by serving their time on earth it would fastrack them through purgatory, reaching heaven ahead of their benefactor: if they were grateful to their benefactor they could put in a good word.

What sins might have been troubling Nicholas Rolin?  The official guide book declines to speculate . . .  self-glorification, egotism, an attempt to influence his afterlife, to move to the right hand side of Christ(see “The Last Judgement”) have all been ascribed as motives.

To have created a palace for the poor, he must thought he had huge sins to cleanse. There was cynicism as to his motives for his grand project and suspicion as to how  he had amassed so much money. When Louis XI heard about the scheme he said “It is only right that Rolin after having created so many poor people during his lifetime, prepare for them an asylum before dying”. Rolin had made many enemies. Nobles resented this bourgeois upstart and there were whisperings of misappropriation of funds. Not the Duke: Rolin is said to have presented Phillip the Good with a list of presents he had received, offering to pay them back. The Duke refused and quipped that there was still some room on the piece of paper for more.  While in the Duke of Burgundy’s service, during his skilful drafting of the treaty of Arras, Rolin accepted a bribe from Charles VII equivalent to todays £4.8 million. When the Burgundy army captured Joan of Arc, Charles would not buy his own saviour, but the English paid an outrageous £10,000. It is likely that part of this reached the Chancellor’s pocket.

An upper class medieval male who survived childhood had an average life expectancy of around 49.  Nicholas was 66 when building began and 74 on its completion. He stipulated that the building should be completed in five years. It took eight and he immediately opened it. Under the influence of the pious Guigone, he must have been impatient to atone for his sins. Rolin applied the same determination and administrative genius to smoothing his way through Purgatory.

Rolin persuaded the Duke of Burgundy, Philippe the Good to allow and encourage bequests of their property to the Hôtel-Dieu, the first of which was an eight acre vineyard. Today the institution has 148 acres of high quality vines. The famous wine auctions started in 1794 and continue to this day. In 2009 this one auction raised over eight million dollars for the modernization of hospital equipment and buildings. The Hôtel-Dieu building itself continued to dispense medical care until 1971.