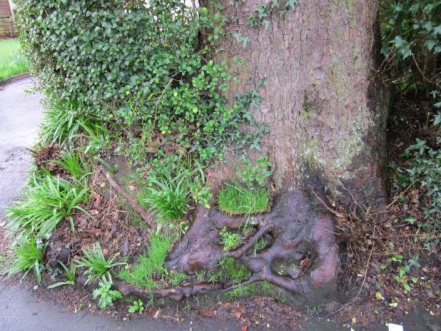 There was little of interest at the top of the sycamore on this March morning though my attention was drawn to the tree’s base.  Refusing to be constrained by pavement, tarmac and three intersecting hedges, venous blue interlocking buttress roots have, over decades, constructed a hillfort.  Hollows between the buttress roots have created small occupied islands; humus filled niches for grasses , bluebells and an unloved dandelion. Kneeling down, my probing fingers uncover a scene reminiscent of King Kong, revealing  spiders, their crustacean woodlice cousins, and a variety of insects all fleeing in panic.

A member of the maple family, the sycamore is not a British native, the earliest being recorded in  1578.  Honestly how long do you have to reside in a country to be regarded as a native? Introduced into estates in Dublin and Cork , by 1731 they were abundant enough for making barrels for the export of butter, tallow and fish.  In later centuries, violins, furniture and dance floors followed.

Moving upwards, the smooth root buttresses give way to the reptilian scales of fissured bark, streaked with pleurococcus.  Little of the trunk can be seen as its modesty is covered with a verdant dress of ivy. The epiphyte has thrived and spread up past the point of bisection of the main trunk, its  water  supplies and minerals relayed by meandering cables of adventitious roots.  Above, two hundred square metres  of tree canopy spans the road.  Clearing the leaf litter in later months puts the cat’s tray into perspective. 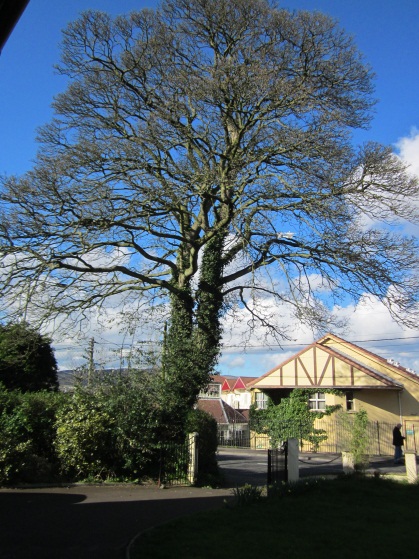 My apprehensions concerning the responsibility for the wellbeing of the tree and that of those who pass below it have decreased with time; it has survived the great storm of 1998, the winter of 2010 and may even have shielded the house by absorbing the shock waves of the bomb which exploded nearby  in 1988.

In a show of arboreal independence It straddles the garden and pavement, contending that neither the Council nor I have ownership.  For the last three weeks it has flown a blue and white standard, the Tesco bag beyond my reach.  Waiting for its cone shaped buds to open one delinquent juvenile branch wiles away the time playing chicken with my neighbour as it stretches his telephone line as if drawing a bow.

Can a tree have a sense of humour?