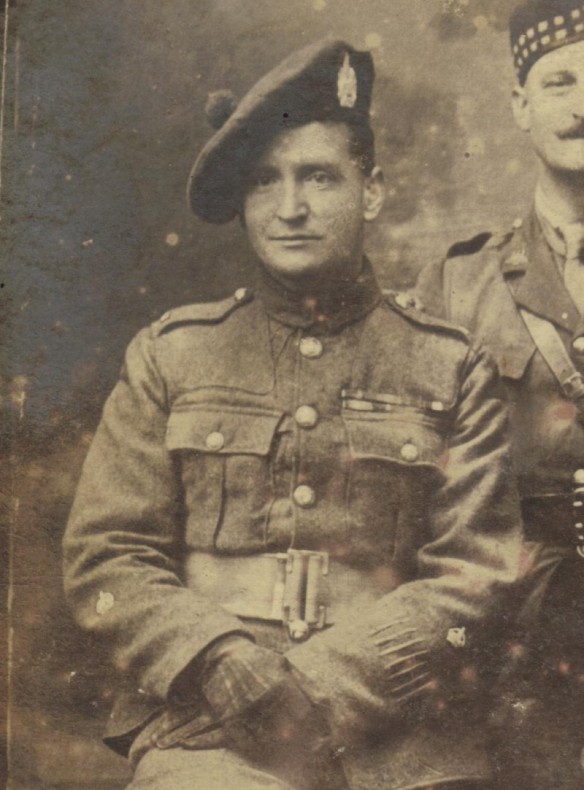 Arguably the most famous soldier in the 29th Division was a Glaswegian, John Skinner. He seems to have been a bloody minded hard man straight out of a war film.  Joining the army in 1900 at the age of 16 he had been wounded three times in the Boer War.

The objective was the intensely fortified village of Langemarck and the German defences concentrated along the Langemarck-Weidendreft road. The infantry were slowly learning how to overcome the pillbox threat but it remained dangerous and costly to overcome them.

“The three blockhouses were spitting out a terrific fire and we were obliged to take cover and move forward gradually by squads in quick rushes. At this period, Company Sergeant Major Skinner and I crawled as near to the blockhouses as possible and succeeded in disabling two of their guns by rifle fire. CSM Skinner, after we had got within about 70 yards of the blockhouses, crawled forward on his own initiative, while I covered his advance with my rifle. After ten minutes he succeeded in reaching that on the extreme left, and going round the back of it bombed the team of gunners with Mills bombs and compelled the garrison to surrender. The second blockhouse he put out of action by inserting bombs in the loopholes where the guns were mounted. By this time I had passed for the company to advance, and we succeeded in reaching the third blockhouse. CSM Skinner’s haul was six machine guns, about 60 prisoners and a few trench mortars.”

The day I planned visit his grave on my walk to Poperinge I woke up feeling under the weather, but I decided to force myself to start. I had planned to avoid the two dangerous main roads to Poperinge but getting onto the quiet roads proved more tricky than I had expected. Eventually I found the sort of back road I enjoy walking

I reached the village of Vlamertinghe and asked various locals where the military cemetery was. Amazingly, they did not know. Perhaps they were commuters. This was eating up time and it was unbelievable that I could not locate it in such a small village. Eventually I stopped an old man and although he could not speak English he and I communicated in sign language. I was quite chuffed with my impression of a crossroads, which was worthy of Marcel Marceau. When I reached the signpost it was pointing towards someones back garden. Was the mischievous John Skinner playing tricks on me? Was the sign correct? I gingerly walked through a private garden, passing the kid’s toys and the vegetable patch and there it was- The “New Military Cemetery”.

On  the 19th of March,1918 , in pouring rain,  Skinner was given a heroes funeral in which his body was brought by a gun carriage drawn by a magnificent team of horses to the Vlamertinghe Cemetery and was then carried by six VC holders of the 29th Division. 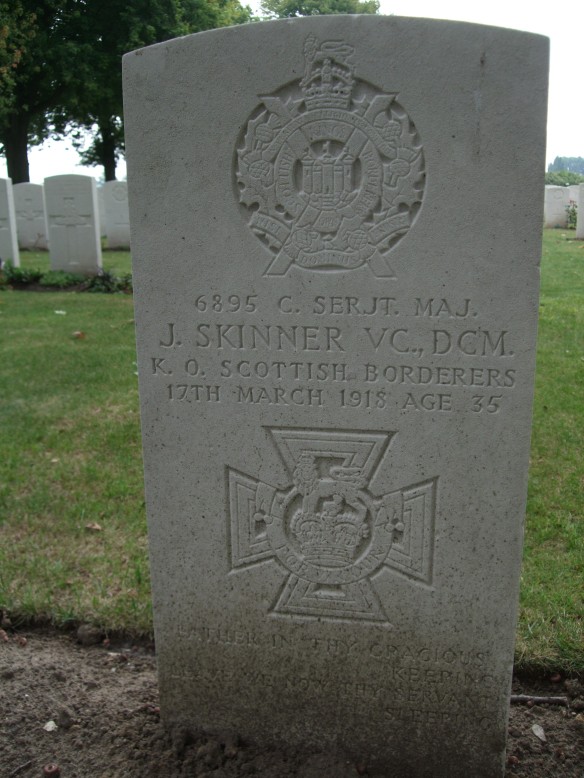 I tried to imagine the scene on that day with the team of horses and the six VC holders. I left the cemetery and started to follow the road to Poperinge when I noticed something disconcerting heading towards me.